Two expressways with a total price tag of $3 billion and a construction schedule that could span 15 years have been referred to as “highways of hope” for the region around Pittsburg in western Pennsylvania.

The Mon Fayette Expressway extends from Pittsburgh through the Monongahela River Valley and Fayette County to I-68 near Morgantown, WV. The Southern Beltway forms a 30-mile arc around Pittsburgh between the Mon/Fayette and Beaver Valley expressways. The two routes improved access to Pittsburgh International Airport and to towns where steel and coal industries once prospered.

Seeking cost-effective ways to enhance the quality and safety of its new route, the Turnpike Commission specified white concrete for all the mainline bridge parapets on both the Mon Fayette and the Southern Beltway.

Recognizing that more accidents per mile driven occur at night than during daylight hours, the commission wanted to make bridge parapets more visible during dark, rainy nights, and the decision was made to use white concrete parapets.

Some reports indicate that white concrete barriers cost more per lineal foot than gray barriers. However, costs to paint a gray barrier white, not including additional costs due to traffic delays and motorist inconvenience, more than offsets the extra expense of white concrete, especially since repainting can occur at intervals of anywhere between one and ten years. 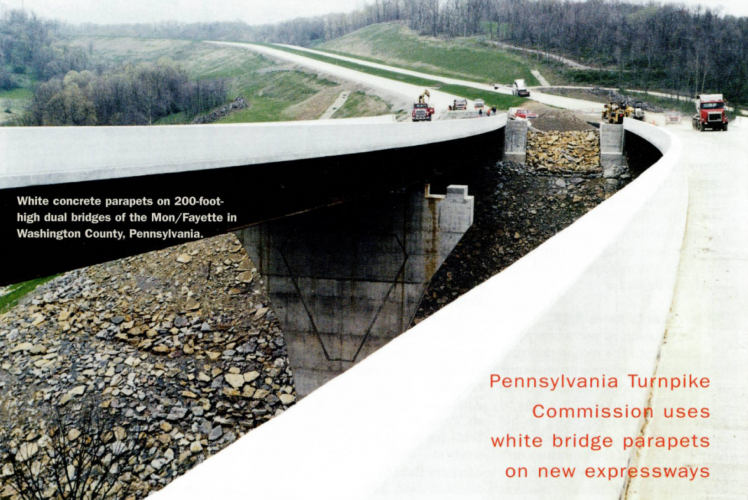